Breakout for PetroBakken Energy on the daily chart 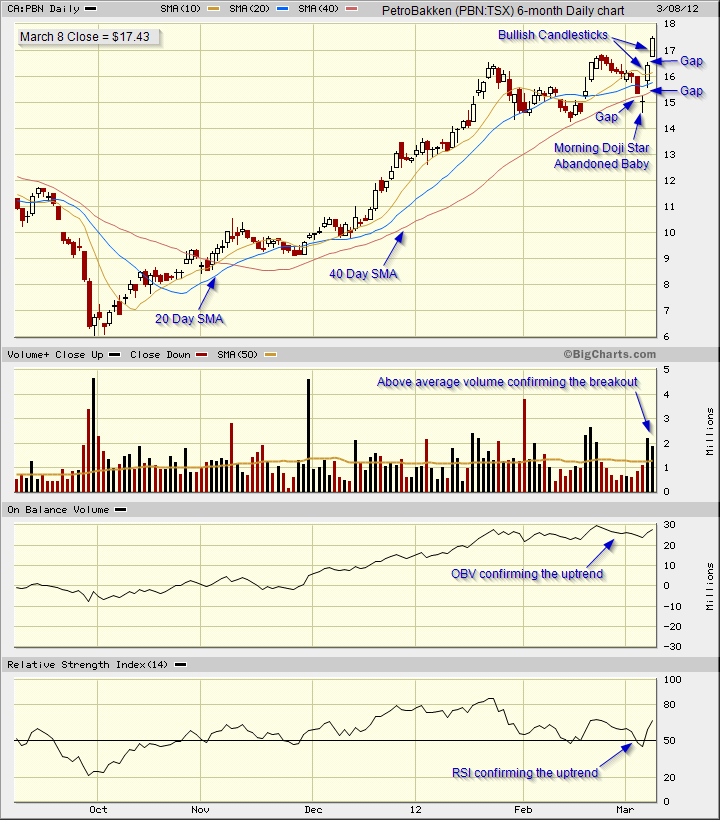 PetroBakken Energy (PBN:TSX) candlestick chart analysis showing the morning doji star candlestick pattern. And a bullish white candlesticks gaps away from the previous white candlestick with a confirmed breakout at $17.00. Volume, On Balance Volume (OBV) and the Relative Strength Indicator (RSI) are confirming the uptrend.

The morning doji star is a major reversal pattern which called an end to the near-term downtrend that started on February 23. It is comprised of three candlesticks. The first candlestick is the dark tall bearish candlestick that appeared on March 5. The bears were in control at this stage but the volume was relatively light. Then on March 6, a gap appears with a doji (narrow or the same opening and closing) which is the second part of the pattern. Then on March 7, there is another gap and a tall white candlestick associated with above average volume. The reversal pattern is now completed. This particular morning star formation is rare and would be properly called an abandoned baby. It has two gaps where there is no overlap of the shadows.

You must always be cognizant of the fundamental news for a company and the reaction on the chart. View the following release for the details: PetroBakken Energy Ltd. is pleased to announce our fourth quarter and year-end 2011 financial and operating results.

Note: This technical analysis is for educational purposes so you can learn to trade online using candlestick charts. Please conduct your own chart analysis or consult your financial advisor before making investment decisions. The chart snippets are from BigCharts.com which I recommend and have used for fifteen years. The author of this article may hold long or short positions in the featured stock or index.

S&P 500 is holding the breakout above the 200-day https://t.co/WzZ6Baghjr
h J R
@tradeonlineca

We use cookies to ensure that we give you the best experience on our website. If you continue to use this site we will assume that you are happy with it.Ok