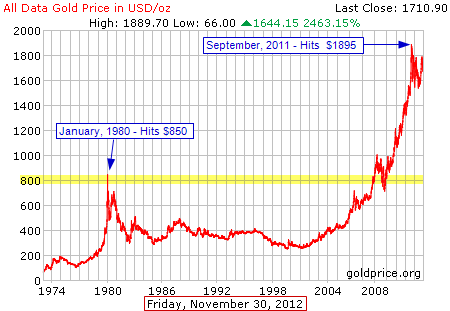 The above charts provide a long-term perspective for gold. The first chart shows the pricing for SPDR Gold ETF (ticker:GLD) for the period 2005 to 2012 in the logarithmic scale. The second smaller chart extends the date range from 1974 to 2012 and shows the actual price of gold in U.S. dollars in the linear scale.

There are two generally accepted principles in technical analysis: (1) individual stocks and broad indexes move in trends, and (2) the trend will continue until there is evidence to the contrary. How is this relevant for gold? The long-term trend for gold is up and is currently trading in a major and intermediate lateral trading band. And the near-term trend is down. Given the assumption that the long-term uptrend will continue for gold, a breakout above resistance of 174 and 185 (ticker:GLD) would confirm the continuation of the long-term uptrend. On the contrary, a break below support of 150 (ticker:GLD) would raise a red flag for the continuation of the uptrend.

Relevant articles picked from the Web:

Note: The above chart analysis is valid as of the publication date. To review current charts click on Home or perform a search. This technical analysis is for educational purposes so you can learn to trade online using candlestick charts. Please conduct your own chart analysis or consult your financial advisor before making investment decisions. The chart snippets are from BigCharts.com which I recommend and have used for fifteen years. The author of this article may hold long or short positions in the featured stock or index.

We use cookies to ensure that we give you the best experience on our website. If you continue to use this site we will assume that you are happy with it.Ok