Shoppers Drug Mart could not break $41.

Your online trading success does not depend on your predictions for the market: your success depends on your online trades in reaction to market signals. 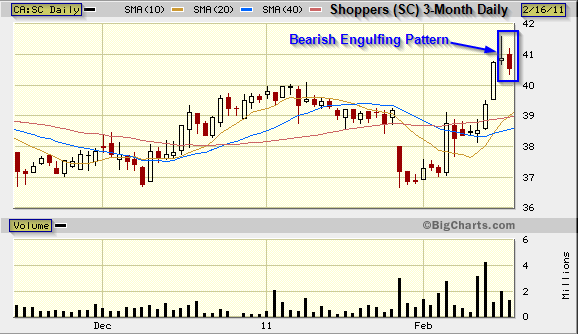 A shooting star candlestick developed on the daily candlestick chart which can be compared to a caution light.

It shows that the rally could not be maintained.  The stock opened at $40.82, above the close for the previous day’s bullish white candlestick, which was a strong opening.  But the bulls could not maintain the push  as the stock rallied to a high of $41.59 where there was selling pressure and the stock closed at $40.87: this was not a good day for the bulls. 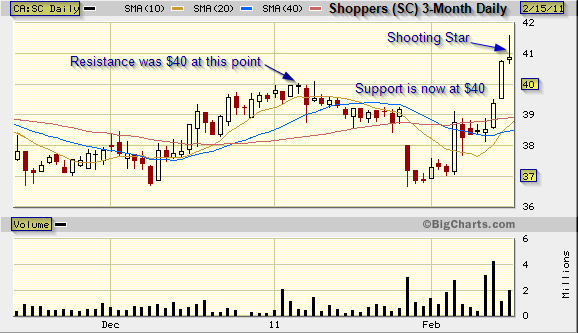 The trend is the most important concept in technical analysis. The intermediate trend (3 weeks to 3 months) is sideways and the near-term trend (within the last 3 weeks) is up. What we are trying to establish in this analysis is the likelihood of the near-term trend continuing upwards. Today, there is a hint of caution which you can see pictorially in the shooting star candlestick pattern.

Another important concept in technical analysis is support and resistance. On Monday, Shoppers Drug Mart closed above resistance at $40. This has been resistance for the last four months. The $40 price point reverses rolls and is now support for this stock. A close below $40 would be very negative for the near-term trend for Shoppers.

TradeOnline.ca featured Shoppers on February 6 and highlighted the first bullish white candlestick  that developed on above average volume. Above average volume is a confirming indicator and is the fuel that drives the upward trend. The $40 level is now support and the stock must hold above this point for the trend to continue. 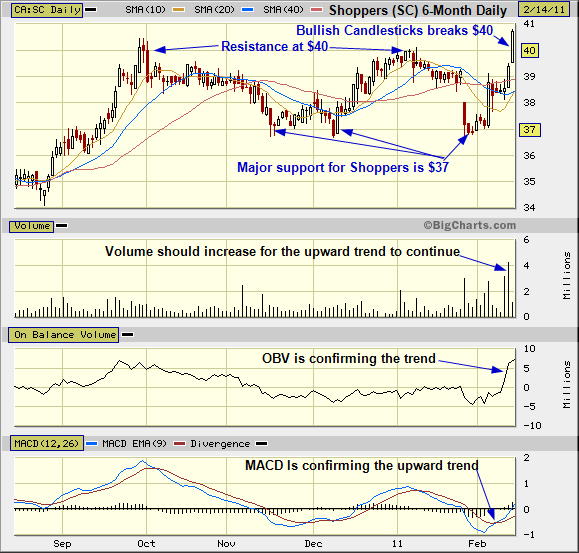 Shoppers Drug Mart will meet heavy resistance at $42. You can identify this point on the 3-year weekly chart.

Shoppers was upgraded from hold to buy on February 11 and the price target was raised to $43 from $39.

Note: This technical analysis is for educational purposes so you can learn to trade online using candlestick charts. Please conduct your own chart analysis or consult your financial advisor before making investment decisions. The chart snippets are from BigCharts.com which I recommend and have used for fifteen years.

Technical analysis gives you a snapshot of the S&P/TSX composite.

It has been a good run, and now is the time to closely monitor the candlestick charts and confirming indicators for a top reversal pattern. 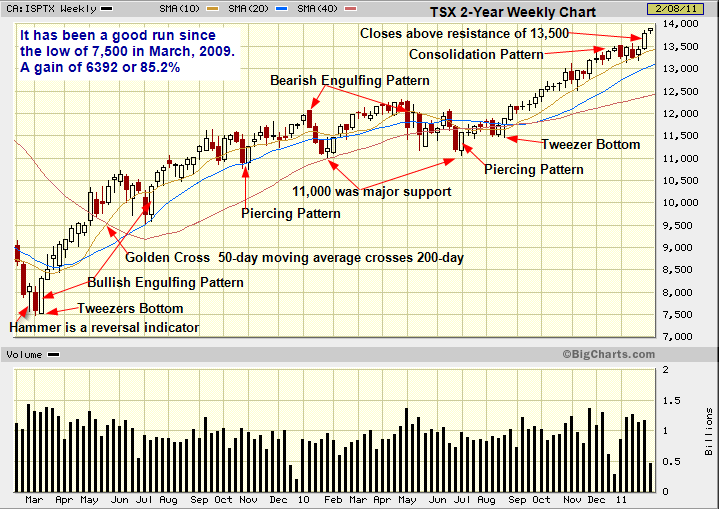 This is an excellent article from the National Post covering the fundamental valuation metrics for different markets: Did I miss the rally?

Note: This analysis is for educational purposes so you can learn to trade online using candlestick charts. Please conduct your own analysis or consult your financial advisor before making investment decisions.

The chart snippets are from BigCharts.com which I recommend and have used for fifteen years.
Copyright © TradeOnline.ca All rights reserved

The most important point in technical analysis is to determine the trend.

The intermediate and near-term trend for Pfizer (PFE) is up.  This drug stock had a very good move last week as indicated by the tall bullish white candlestick.  Also, the volume was above average: the volume is the fuel that drives a stock higher. Any upward price movement on low volume is suspect. If the stock can break resistance at $20, the next target price will be $22.

Pfizer, including other drug stocks, has underperformed the Dow over the last couple of years.  Pfizer has a decent yield of  4.15% and a solid cash flow. Now, traders are buying this orphan. 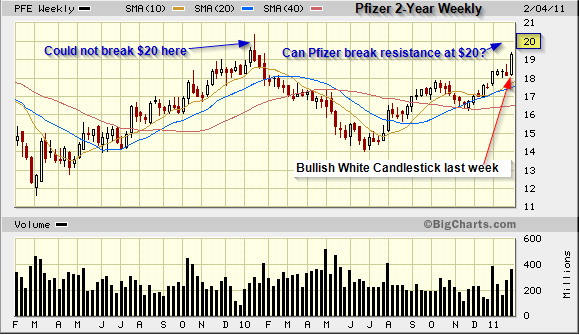 The intermediate trend (three weeks to three months) for Suncor is up.

But the shooting star candlestick is a warning signal: it is like a yellow light indicating caution. I do not want to see a close below $40 which is a support level. The next major support point would then be $35. 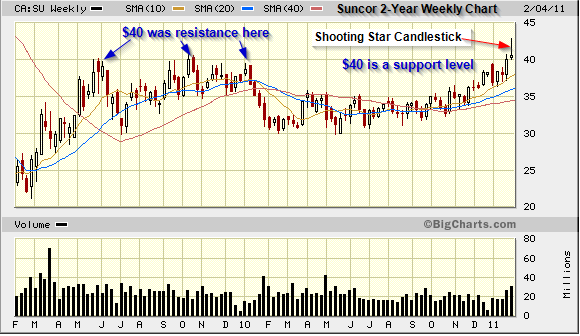 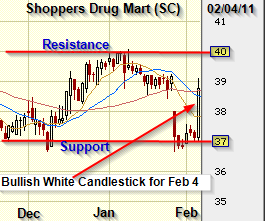 There was a bullish white candlestick for Shoppers Drug Mart (SC) on Friday, February 4.

Please customize and then reference the full-size chart from Bigcharts.com for a better overall view of the trend.  Shoppers has been trading sideways since October so a break above the $40.00 resistance level would be a significant event.

Read the Globe and Mail article,  Shoppers Drug Mart’s quest for an elixir, for some current background information.

Note: You must take a couple of minutes to customize Bigcharts.com so that the links to the charts open with the indicators used in this site.

Note: This analysis is for educational purposes. Please conduct your own analysis or consult your financial advisor before making investment decisions

Here is how to customize Bigcharts using the advanced chart settings

You need to take a couple of minutes to input one-time settings to customize the chart view. Now, what you see on your computer is consistent with the explanations on this site.

This link for the 6-month TSX chart will open in a new window in the the advanced settings mode.

Now the settings are stored on your computer and will link properly from the posts.

I will discuss these advanced settings and others in future posts.