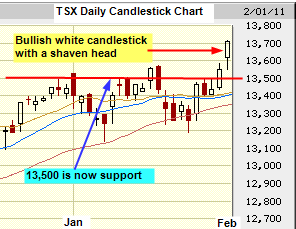 Technical analysis, using candlestick charts, allows you to gain a quick snapshot of the price action without bogging down in the details.

Today (Tuesday), the TSX opened above Monday’s close and high for that day. The high is indicated by the shadow on Monday’s candlestick.  So, we had a very nice opening to start Tuesday trading: the opening is the rudder for the trading day.

Then the market continued to trade higher and closed at 13,712 which was very close to the high of 13,714. Anytime a stock or index closes near the high of the day, that is a very good closing. It is called a shaven head white candlestick because there is no shadow.

Another important principle to discuss regarding technical analysis is the reversal of resistance to support.  Yes, when resistance is penetrated with a close above that level, that resistance level (13,500) reverses rolls and now becomes support.

Reference the full sized 6-month Bigchart for the TSX, 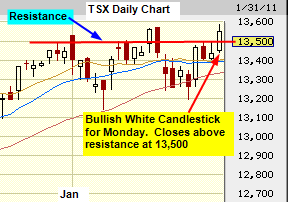 Today’s chart snippet for the Toronto Stock Exchange S&P/TSX Composite Index shows the bullish white candlestick which closed at 13,551.  This was a close above the resistance level of 13,500.  View the  this full size customized chart which is provided by BigCharts.

Now, for the rally to continue, the tsx should open at or above the close of today and end higher tomorrow: in other words, another white candlestick. Bulls like tall white candlesticks with small shadows or none at all.

All the market news is reflected in today’s candlestick: Egyptian protests, price of crude, copper at a all time high and the list goes on.  How the market indexes or individual equities react to both good and bad news is an important observation in technical analysis.  One guideline, if a stock does not sell-off on bad news then it is going up. 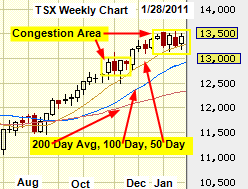 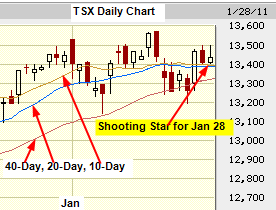 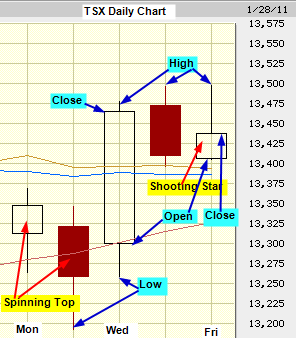 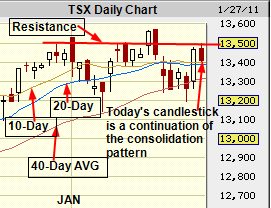 Technical analysis can be adapted to any time frame. Today, we continue our analysis of the near-term trend (less than two or three weeks) for the TSX.

What did today’s candlestick reveal?

It was a small red candlestick with no major negative implications when viewed on its own. When viewed in relation to the previous day’s tall white candlestick, it is classed as a harami cross ( inside day) formation.  In other words, the price movement was within the range of the previous day’s action. It just confirms the consolidation phase (sideways) for the TSX and was not a positive pattern after a tall white candlestick.

The index must break and hold above 13,500 to confirm a new upleg in the market.

The TSX looks a little tired at this stage . Be cautious about adding to long positions.

The chart snippet above was snipped from this 6-month live chart. This large chart will give you a better overall view of the trend and includes other customized indicators. 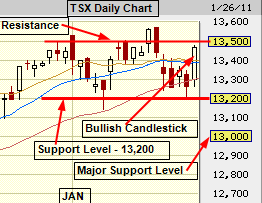 Technical analysis provides a graphical picture of the market and one of the most colorful components is the mighty candlestick: a light to illuminate the darkness at the end of the tunnel.

The January snippet to the right —  showing the bullish candlestick for today —  was snipped from this 6-month daily candlestick chart . This is a live chart that changes daily.  Refer to this live 6-month chart for a better overall view of the trend and the chart pattern.

So what are the components of a white bullish candlestick?

The energy and materials stocks were the big movers today.  Traders saw support developing around the 13,300 level and went for the ride.  But, unless there is a break above 13,500; the TSX is still in a consolidation (sideways) trading range.  Will there be a follow-through on the buying tomorrow? Or will the day traders start selling at the 13,500 level?

For an investor with a longer term perspective, I would not buy into the market unless there is a confirmed close above 13,500. Then you maybe able to ride another upward leg in the index. 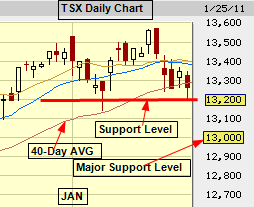 Technical analysis gives you an objective view of the market.

I would consider a break below 13,200 a reason to liquidate some long positions.

Technical analysis gives you a guidepost to make investment decisions and  takes some of the emotions out of those decisions. 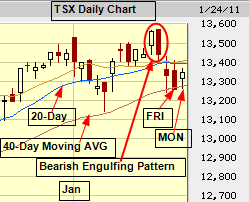 The snippet of today’s chart is snipped from a customized 6-month daily candlestick chart of the TSX. I use the 6-month and the 1-year daily charts to establish the near-term trend (less than three weeks) of the TSX index.  The 40-day, 20-day, and 10-day moving averages are used in conjunction with the candlesticks as confirming indicators: the 40-day average is currently a support level on the chart.   The following is a summary of the price action on the chart:

Conclusion:The major trend (in effect for six months to a year) as seen on the 3-year weekly chart is up as defined by the 50-day simple moving average. The 40-day moving average as seen on the 6-month daily chart and in the snippet  is also a good approximation of the the trend.  But, as discussed in today’s analysis; the short-term trend is moving in a sideways (consolidation) pattern.  The recommended strategy at this stage is to invest no new money in the TSX until there is a confirmed break above 13,500.  If the market breaks down through the 40-day moving average on the daily chart, it is time to liquidate some long positions.  Major support is at 13,000 and a break through this level could see a retracement to the  12,500  level.

Technical analysis reveals — in graphical form — what is happening in the market: it does not tell why. 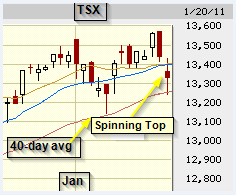 On Tuesday, the tsx closed above 13,500 which was good as this was an area of resistance over the last three weeks.  On Wednesday, the  tsx did not hold 13,500: this is not good from a technical perspective. Today (Thursday), the market gapped down at the open — through 13,400 — and traded in a tight range as indicated by the candlestick pattern called a spinning top.  In the snippet  to the right which is snipped from this full size chart , you can see where the 40-day moving average was tested: look at the spinning top candlestick pattern and note where the shadow touched the 40-day moving average.  The spinning top represents a battle between the bears and the bulls.

At this stage in the market,  do not add to long positions:  you may even consider liquidating some longs. The chart pattern is telling you to be on guard.  The tsx could trade sideways in a consolidation pattern and then make another run at 13,500. Or, it could close below the 40-day moving average which defines the trend: this has negative implications for the market.

Major support for the tsx is 13,000. If the index closes below this level, all bets are off.

Stay tuned to the continuing story.